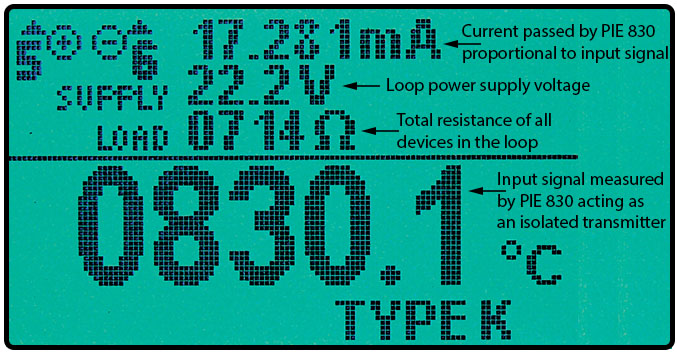 When a process control loop is operating correctly it is an easy job for the technician to grab a calibrator or two and calibrate all the instruments in the loop including the transmitter, any indicating/recording devices and the controller. If there is a problem with one of the devices in the loop it is a MUCH harder job to quickly identify which device is faulty and get the process operating again. Learn a easy and fast way to troubleshoot current loops!

Stop randomly replacing instruments until the problem is fixed

An easy, but time consuming and costly method, is to start by replacing devices until the loop is running again. You might start by replacing the transmitter, then the power supply, then the indicator, etc. Is this a good way to troubleshoot current loops? Or you can temporarily replace the transmitter with the PIE Model 830, turn on LoopScope (see photo above) and instantly determine the condition of the loop.

The 830 simultaneously  displays the sensor input value with the corresponding milliamp output, the voltage put out by the power supply (less the voltage drops of the devices in the loop), and the resistance (ohms) of the loads in the loop. Doing this testing in a live loop with full loads lets you see if the loop supply has enough power to drive the loop from down scale burnout to up scale burnout and still have enough headroom to safely shut the process down. No other brand of calibrator or multimeter can show you all the operating parameters in a live 4 to 20 milliamp loop!

Use the PIE 830 to temporarily replace a transmitter

Once the technician finds that the transmitter is faulty they can temporarily leave the loop running with the 830 in its place while a replacement transmitter is taken from stock and configured. This saves time and keeps the process from being placed under manual control or worse, shutting down the process and dumping the batch!

Take a few minutes to watch the video and see how the using the PIE Model 830 as an Isolated, Troubleshooting 4 to 20 milliamp transmitter can save you time and money.

You may also use the PIE Model 830 to locate hidden loop issues due to hidden leakages in the loop. PIE’s patented Loop Leak Detection finds hidden paths to ground that cause difference between the current controlled by the transmitter and the current measured by the controller. These leaks are often caused by water or other contamination getting into the wiring conduits or junction boxes causing corrosion bridges or flooded junction boxes. Even a well-sealed system can have moisture from the trapped air condense on the terminal block as the temperature in the conduit rises and falls. In extreme cases, this can lead to large changes in the milliamp signal measured by the controller causing dangerous conditions due to the controlled process running at a much different temperature, pressure or speed than is safe. Another method unique to PIE calibrators to troubleshoot current loops.

We recalibrate and repair all PIE calibrators.
See our Repair and Calibration Services page.